Four years ago, the Carter’s gifted their 120-acre property to Evangel. That included house furniture items, antiques and original art. View available items below. If you have any questions, contact Becky Mallette at 906-231-0081. 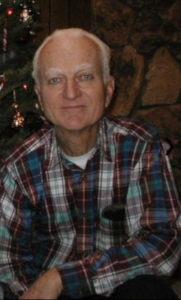 Upon his passing in 2018, Allen Carter bequeathed his family’s farm to Evangel Community Church. Along with the property, the gift included a surprise treasure: 160 pieces of artwork by Allen’s parents, the late Lawrence and Evelyn Carter.

The Carters purchased the farm in 1949, and they relocated from downstate to live there year-round for a few years. They then moved to California, but traveled back to the Keweenaw every summer to grow and sell organic strawberries, blueberries, and raspberries. They also held art classes. Lawrence designed a combination easel and art box, and during the 1950s and ’60s, he sold them from the rural farm with a mailing address “Carter’s School of Art, Department AA80, Chassell, MI.” Their love of the area is reflected throughout the collection, which includes landscapes, florals, watercolors, oils, and portraits. 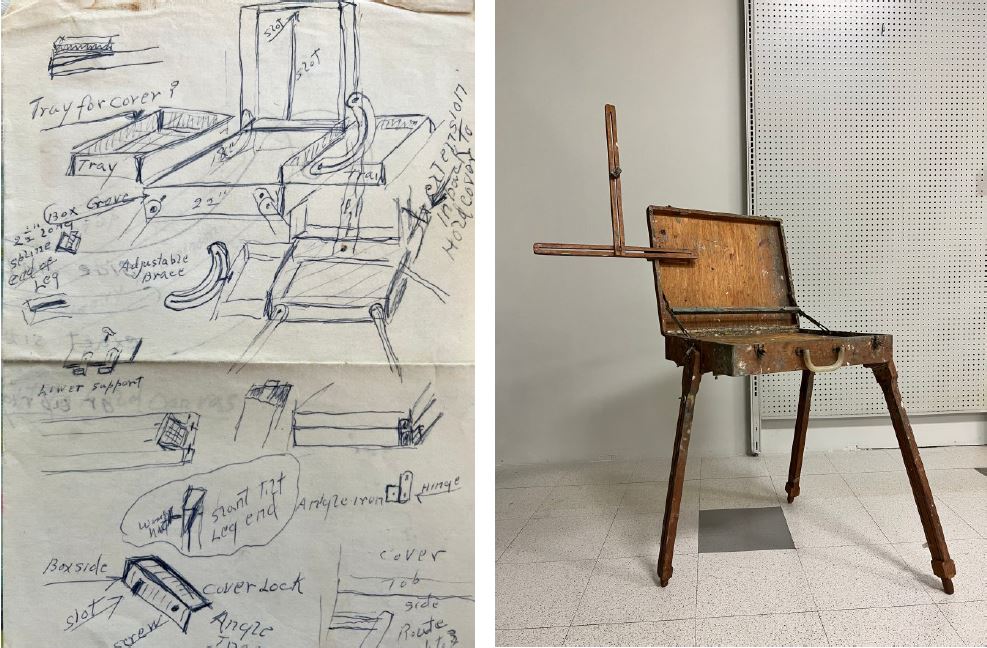 Evelyn Carter was the fifth of nine children of Dr. Edward and Elizabeth Koivupalo Sohlden. Edward immigrated to the U.S. from Finland when he was 10 years old, and he became a medical doctor serving Chassell, Hancock, Calumet, and Bruce Crossing. Lawrence and Evelyn depicted his horse-drawn buggy in several works. 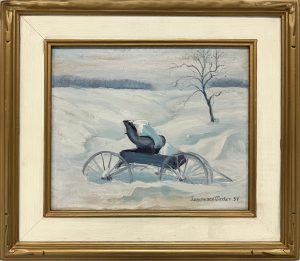 Evelyn graduated from Calumet High School in 1925 as salutatorian of her class. She became a teacher and taught art for over 22 years in Monroe, Michigan, and she also taught at the former South Portage Entry School, Calumet Public Schools, Houghton-Portage Township Schools, the former John Doelle School in Tapiola, and in California.

Lawrence Carter was born in Moscow, Michigan, and graduated from Sturgis High School in 1924. Lawrence loved music and played tuba in a seven-piece band called Haydn’s Orchestra. An advertisement from the mid-20s stated “You’ll Dance to Haydn’s Music,” and the band “Furnishes Music for All Occasions.” 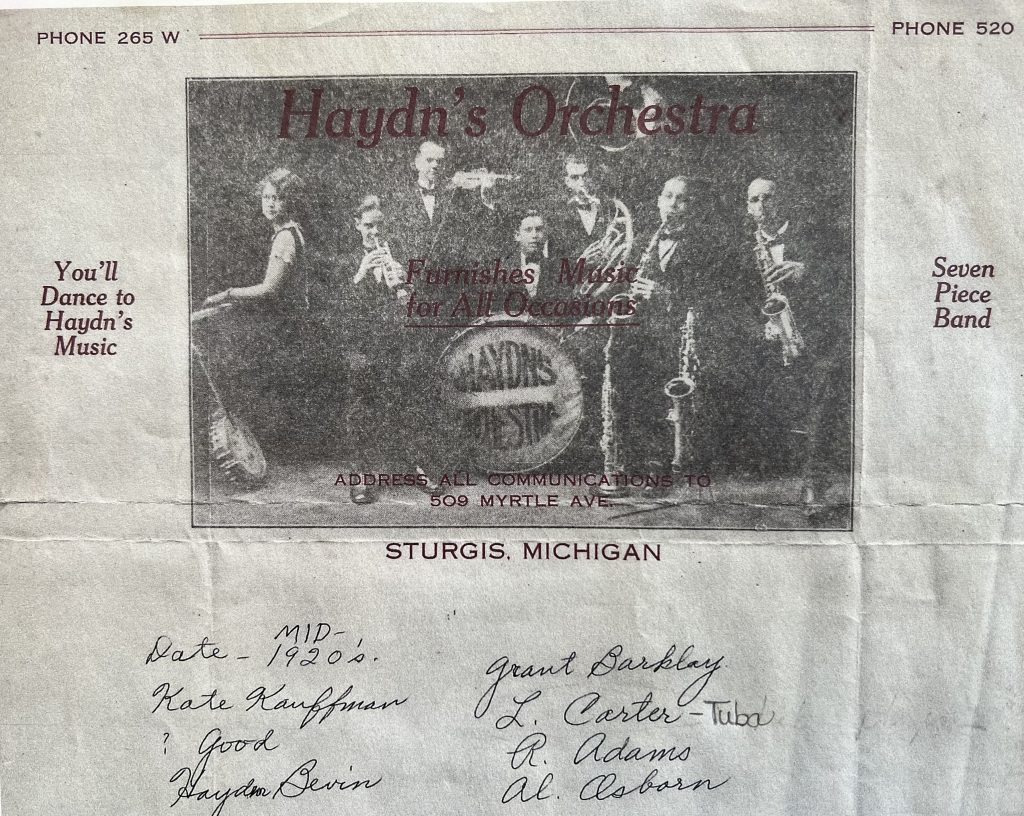 Lawrence played tuba in Haydn’s Orchestra in the mid-20s.

Lawrence married Evelyn in 1930, and they pursued their passion of art over their lifetime. 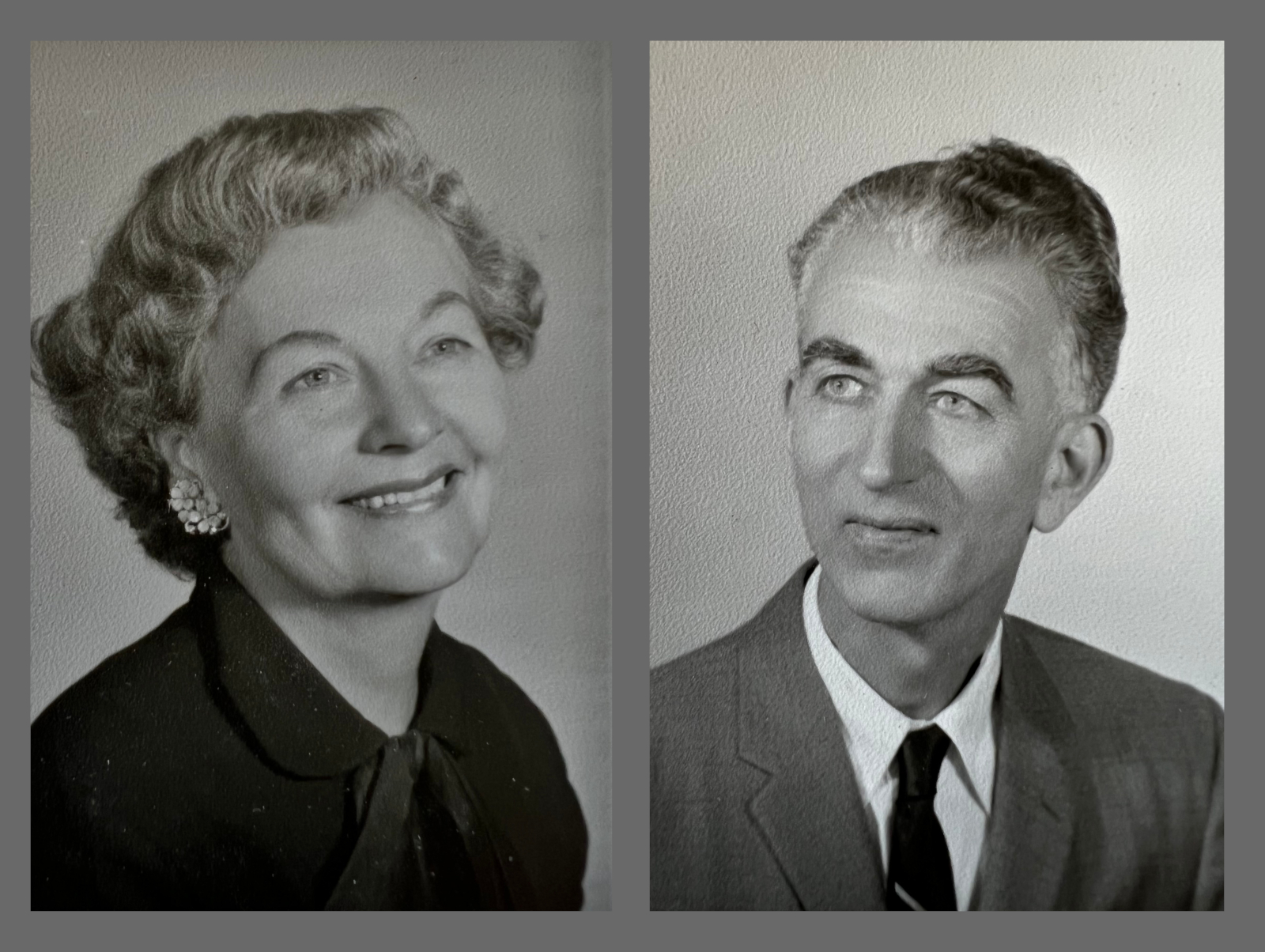 Lawrence’s many works include pastels, portraits, pencil drawings, oils, and watercolors of the local area. He titled some of his work with the location and the date, and the earliest work in the collection is dated 1939.

In 1964, the Christian Hall of Fame in Canton, Ohio, commissioned Evelyn to paint nine portraits, and her work continues to be on display there along with over 150 other portraits of well-known Christian saints.

Evangel donated six pieces of Evelyn’s work to the Calumet High School, and five of the pieces will be on display in the library. In the meantime, the public can view the artwork at the Calumet All Class Reunion Art Walk on July 16, 2022, and have the opportunity to purchase one of the paintings in an auction for the benefit of the Calumet High School Art Department.

Evangel also donated some of Evelyn’s artwork to the Finnish American Heritage Center. The donated pieces include landscapes that reflect the Finnish heritage of the area and portraits of Evelyn’s mother, Elizabeth, her husband, Lawrence, and her son Allen as a young boy.

Also, the Copper Country Community Art Center received a donation from Evangel of two pieces from the Carters’ collection. 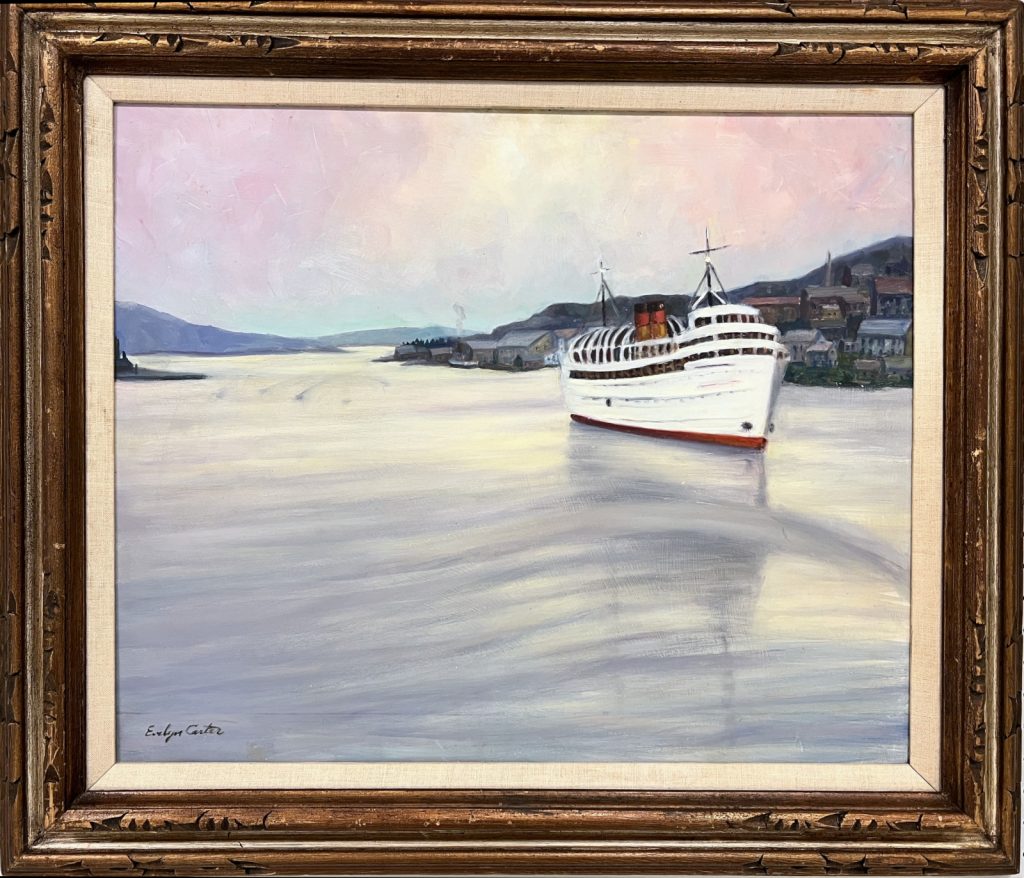 The Carters wove together their love for God, nature, and all things grown organically. Allen intended the gift of property to benefit the mission of the church, and it will indeed do that. We must also thank Lawrence & Evelyn for their gifts to the Keweenaw: the hearts and souls of those who learned to love Jesus through their example, the knowledge they passed down to many art students, and the joy of those who delighted in eating organic berries. 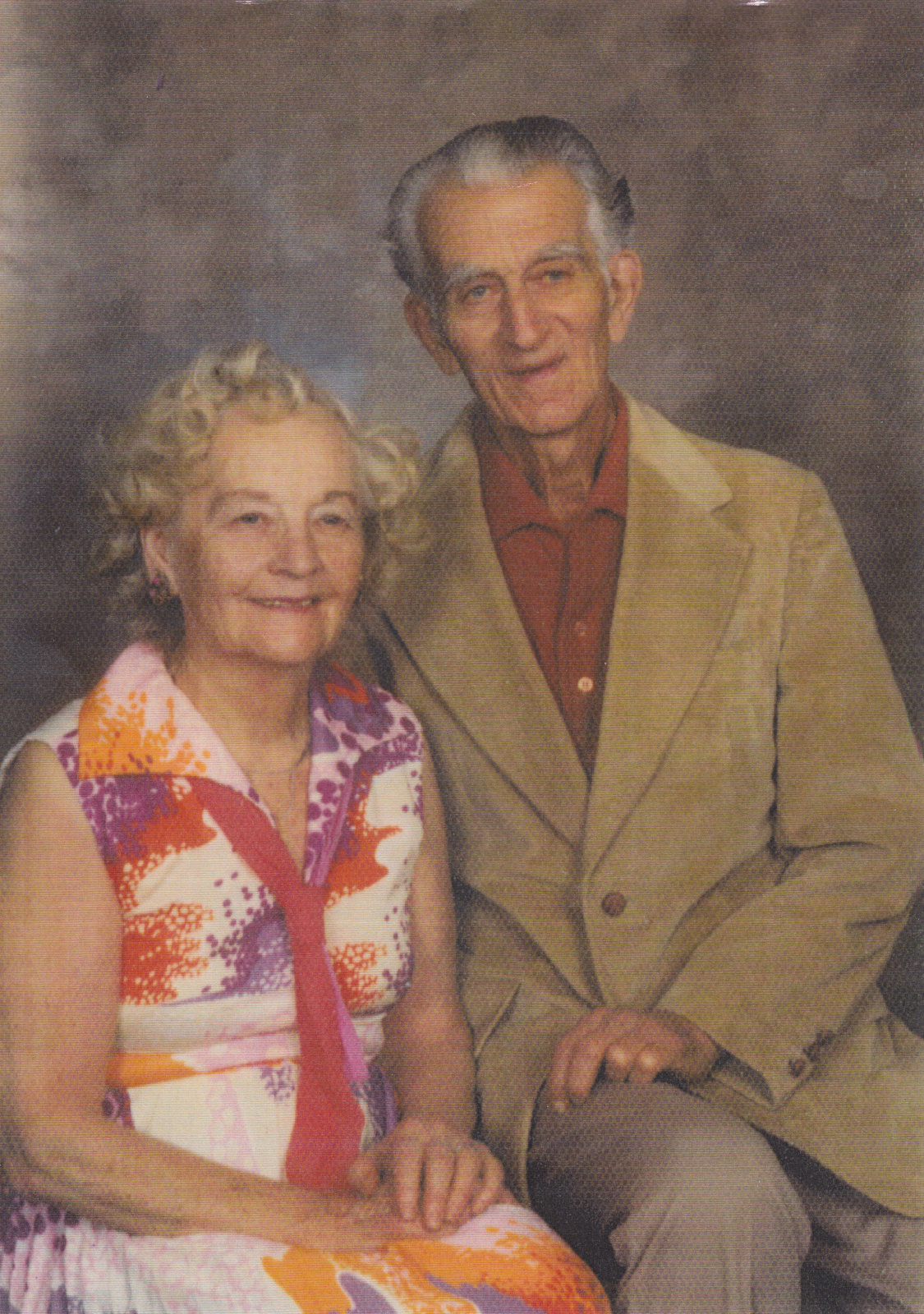 It has been almost 52 years since my husband, Donald, brought me from sunny Mexico to the UP of Michigan. I guess that makes me a Mexican Yooper!

Don knew I liked art, so he brought me to meet his friend from high school, Allen Carter, and his parents, Evelyn and Lawrence, who were artists. They were a godsend for a very lonely and homesick, newlywed girl, who came to a completely different country — a different environment with a different language, different food, and especially different weather!

I started to go to the Carter’s art studio in the early 1970s. I found myself doing what I loved to do with such a friendly and talented family.

Evelyn excelled in oil portraits. She was very godly, talkative, and an excellent teacher. She had taught art at the Houghton High School in the 1950s, and she was Don’s teacher in the 10th grade.

Lawrence was also an excellent artist, and he excelled in florals and landscapes, in both watercolor and oil mediums. He was a very quiet man, who complemented perfectly his wife’s personality.

Evelyn loved the Lord, and she had to make sure I did, too. I was raised as a Catholic, very lukewarm, and I thought I was just fine with what I knew of the Lord, but Evelyn told me, “You know about Him, but do you know Him personally?” I didn’t know exactly what she meant, so right then and there, I repeated the prayer of salvation. Soon after she brought me to Evangel Baptist Church, and I met Pastor Steve and his wife Marcia. Right away he asked me if I was a believer, and at that point I was, but I didn’t know a thing about the Bible as I had never owned one.

Pastor Steve very kindly offered to come to our home, Bible in hand, to instruct us about the wonders of God’s Word and His plan of salvation. After about five months of coming once a week to our home, Don and I (again) repeated the prayer of salvation. Jesus became real with Christ’s Spirit living in us, and that has provided hope to our hearts, giving us peace that persists regardless of the chaos swirling around us.

We became better spouses and better parents. God gave us six beautiful children. When they were young, they loved picking berries at the Carter Farm.

The Carters were summer residents, and they held art classes in a quaint barn on their property. Having some artistic relatives in my family, I decided to take one of their classes, hoping to find some hidden talent. 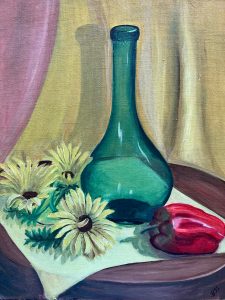 It started out with some good instruction from both Mr. and Mrs. Carter. As we progressed, each of them would come around and offer instructions and help with my painting. It soon became apparent they each had a different approach to my work. One would come by and show me a technique followed by the other who would fix it.

Mrs. Carter mildly reprimanded me at one point for changing a portion of the painting she had fixed, but it was actually Mr. Carter who had changed it.

I’m really not sure how much of this painting was my work. I seriously doubt I could ever reproduce it. Alas, I was not the budding artist I had hoped to become, but I do have fond memories of pleasant summer afternoons surrounded by a number of truly talented people.